There are two ways in which to carry out a search on the PLG:

01) Select a semantic field and then choose a concept from the list provided for each field, in alphabetical order, as shown in Figures 1 and 2: 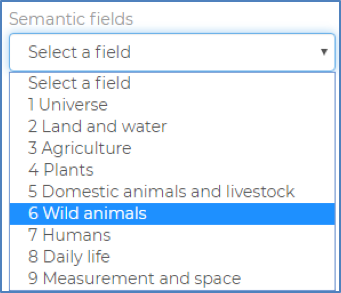 Figure 1.
Selection of a semantic
field 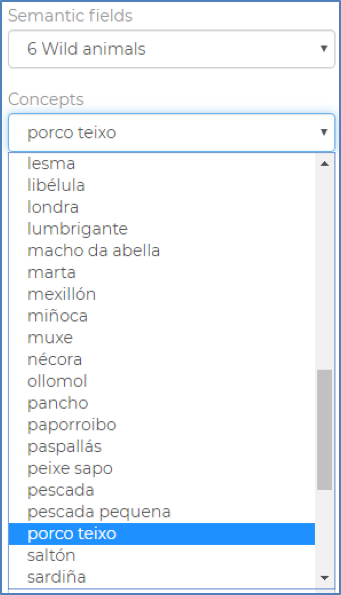 Figure 2.
Selection of a concept associated with a semantic field

02) Select a concept without making a previous choice of semantic field, as shown in Figure 3. The concepts, as in the previous case, appear alphabetically: 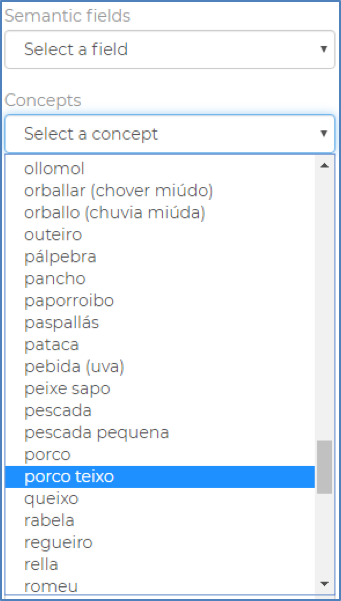 Figure 3. Selection of a concept without prior semantic field filtering

The semantic fields and the concepts can be consulted in Galician or Portuguese. Language choice is at the top right-hand side of the page.

Once the concept has been selected, the application offers a list of lemmas used to express that concept in the Galicia-North Portugal Euroregion or in the Galician-speaking areas of Asturias and Castile and León, as well as its distribution on the corresponding map: 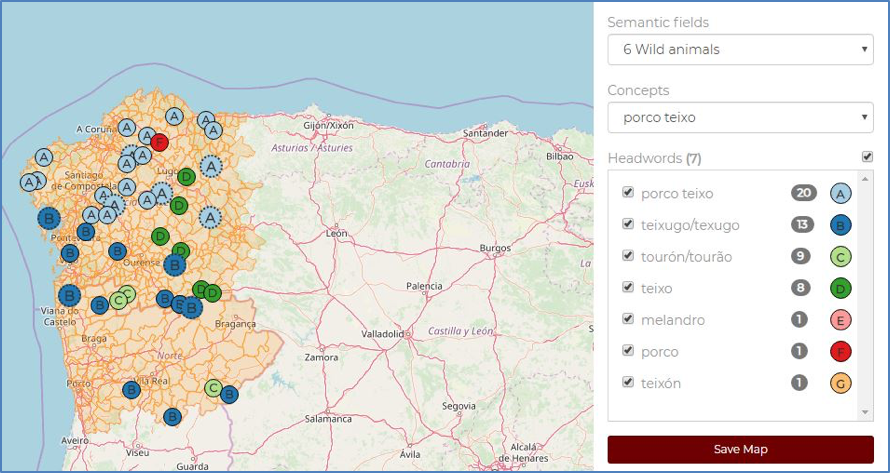 The list of lemmas is displayed under the concept, indicating the number of different registered lemmas (7 lemmas in Figure 5). The lemmas are sorted by frequency, the reference number being the number of municipalities in which each one appears. This numeric data is given to the right of the lemma, on a grey background. Thus, for instance, PORCO TEIXO (‘bagder’) is listed in 20 municipalities while TEIXÓN (badger) is found only in one. 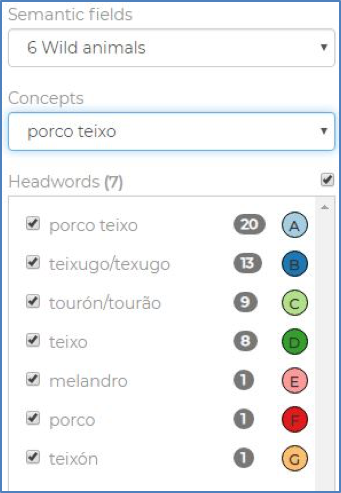 Figure 5. Lemmas resulting from the search for the concept ‘porco teixo’

When clicking on the grey-background numeric data, a drop-down opens showing the variants associated with that lemma, and indicating the number of times each lemma is recorded, as can be seen in Figure 6 (18 examples of porco teixo written as two words, and 2 of porcoteixo, written as one word). For the concepts of lemma and variant, see the project description (What is the PLG?). 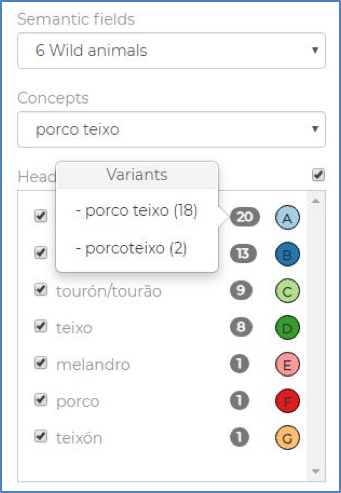 As can be seen in the figures above, there are certain lemmas that are linked by a bar (for example, TEIXUGO and TEXUGO or TOURÓN and TOURÃO). These are Galician and Portuguese lemmas that are phonetic or graphic variants of one another and, therefore, are found together.

On the other hand, each lemma is associated with a symbol used to represent it in the map generated with each search. The difference between symbols is indicated by means of a combination of shapes, colours and letters, sorted from A to Z, from the most common (A) to the least frequent (Z).

The left side of the screen presents the cartographic distribution of the lemmas, represented by the above-mentioned symbols:

Note that the related Galician and Portuguese lemmas (for example, TEIXUGO / TEXUGO, identified with the letter B) are assigned the same symbol on the map.

Clicking on any of the symbols provides information about the municipality, as well as which lemma or lemmas (figure 8) are registered there, with their variants, located below the lemma or lemmas and with a slightly smaller letter. The lemmas and variants contained in this drop-down contain a hyperlink that leads to the corresponding entries in the TLPGP, where the source of the lexical data and other associated information can be found. 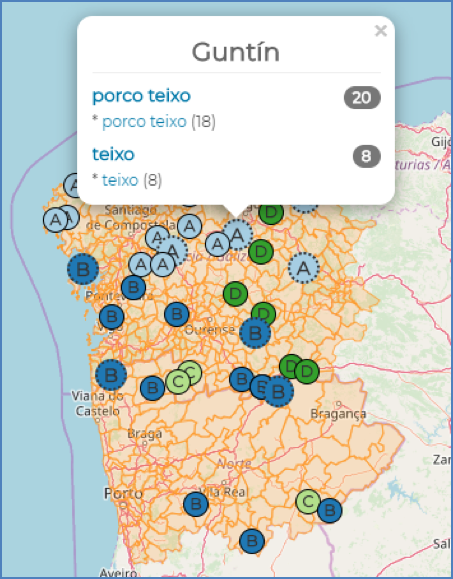 Figure 8. Information on municipalities, lemmas and variants on the map

The numerical information contained in the map drop-down is the same as above when dealing with the drop-downs associated with the lemmas.

As may be seen in the pictures above, some symbols, highlighted in Figure 9, are slightly larger than the others and have a dotted border. 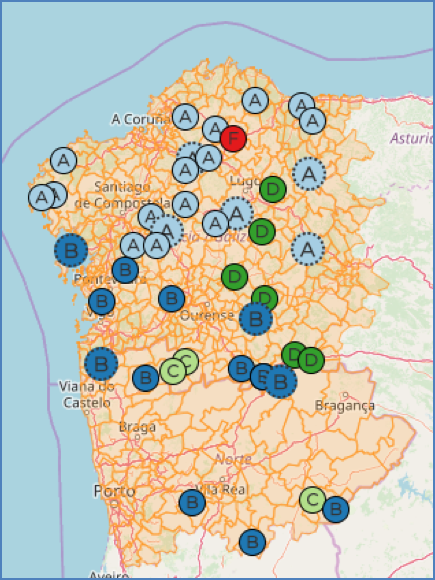 This format shows that more than one lemma is registered in the corresponding municipality, as may be seen in figure 8. The application always represents the most frequent form on the map (in this case, because it is in more municipalities than TEIXO).

In the list of lemmas the user may hide or make visible the symbols of the map. In order to do so, click on the box above the list (all the lemmas are selected or deselected) or in the boxes preceding each one. Thus, for example, in Figure 10 we deselect the lemmas PORCO TEIXO and TEIXUGO / TEXUGO, which shows the forms hidden beneath them: 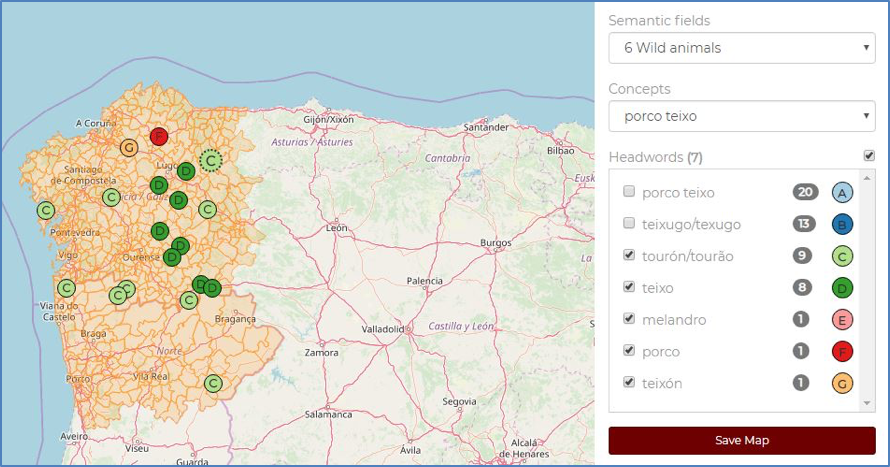 On the other hand, by clicking on the symbols to the right of each lemma, it is possible to select other colours or other shapes to create the relevant map. 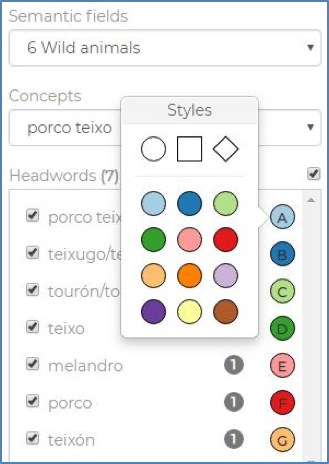 The user can download and save the map (in .png format) by clicking on the bar below the lemmas, as well as download the data in a csv file (in spreadsheet). Further details on how the application works can be found here. 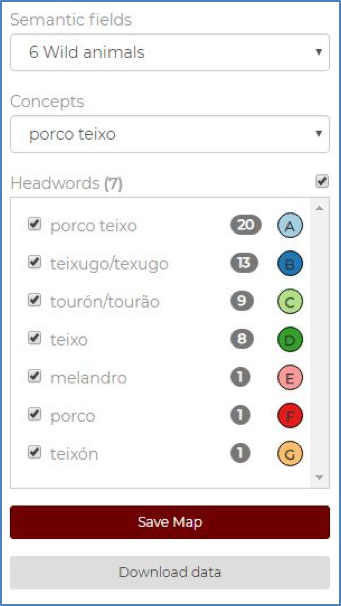